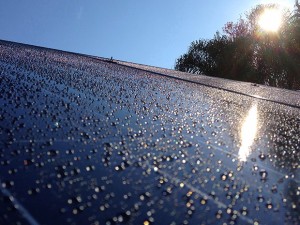 But, regardless of all this, there is still something that limits solar power generation, and that is the weather.

In order for solar cells to produce electricity, there has to be sun. Rain is sometimes welcome (preferably at night), to clean up dust and soil particles that could limit the efficiency of the cells. However, generally, rain and clouds are not associated with optimal solar cell functions.

A team of Chinese material scientists at Ocean University of China in Qingdao, decided to explore what possibilities are out there that could help solar cells overcome this problem. In other words, they went on a quest to find the right material that can help power generation of solar cells by both sun and rain. I guess it is not very surprising to say that graphene, the miracle material, yet again proved to be the best.

Graphene was chosen due to its ability to attract calcium, sodium, ammonium, or in general, positively charged ions. This ultimately results in forming layers of positive and negative ions, which act a bit like energy storage capacitors.

The team decided to bet on this exact property of graphene, and tested what would happen if the material is added to regular dye-sensitized solar cells. They then placed the cells with grapene onto a transparent flexible sheet made of plastic and indium tin oxide. Rain from salty water was simulated to test the performance of the new solar cells.

The result was pretty impressive- flexible solar cell with conversion efficiency of 6.5 percent. Under the simulated rain, the cells also produced “hundreds of microvolts” of power.

The findings, published in the journal Angewandte Chemie International Edition, are very significant and promising. They indicate that improvements in this technology could lead to development of solar cells that can produce electricity in any weather.

The team is hopeful that their future research will help them boost the conversion efficiency. They are now looking to find out how different ions found in rainwater affect energy prediction. The aim is to find ways to overcome the variation in concentrations of this ions.

Eco-Friendly Meat is Here… And No Animals Were Harmed in its...

This website uses cookies to improve your experience while you navigate through the website. Out of these, the cookies that are categorized as necessary are stored on your browser as they are essential for the working of basic functionalities of the website. We also use third-party cookies that help us analyze and understand how you use this website. These cookies will be stored in your browser only with your consent. You also have the option to opt-out of these cookies. But opting out of some of these cookies may affect your browsing experience.
Necessary Always Enabled
Necessary cookies are absolutely essential for the website to function properly. This category only includes cookies that ensures basic functionalities and security features of the website. These cookies do not store any personal information.
Non-necessary
Any cookies that may not be particularly necessary for the website to function and is used specifically to collect user personal data via analytics, ads, other embedded contents are termed as non-necessary cookies. It is mandatory to procure user consent prior to running these cookies on your website.
SAVE & ACCEPT
MORE STORIES

What Is Graphene, Anyway?